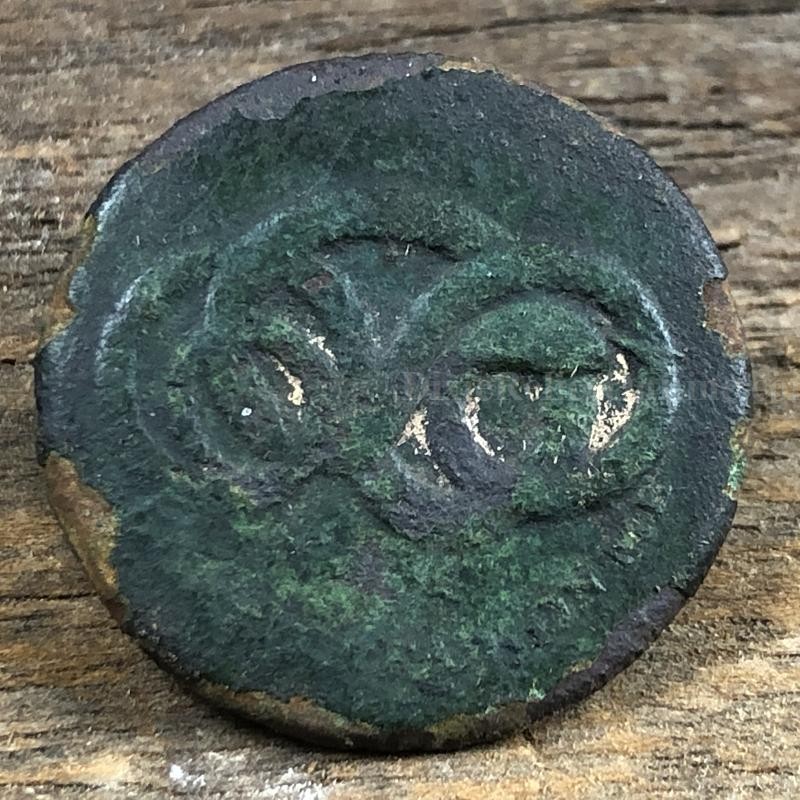 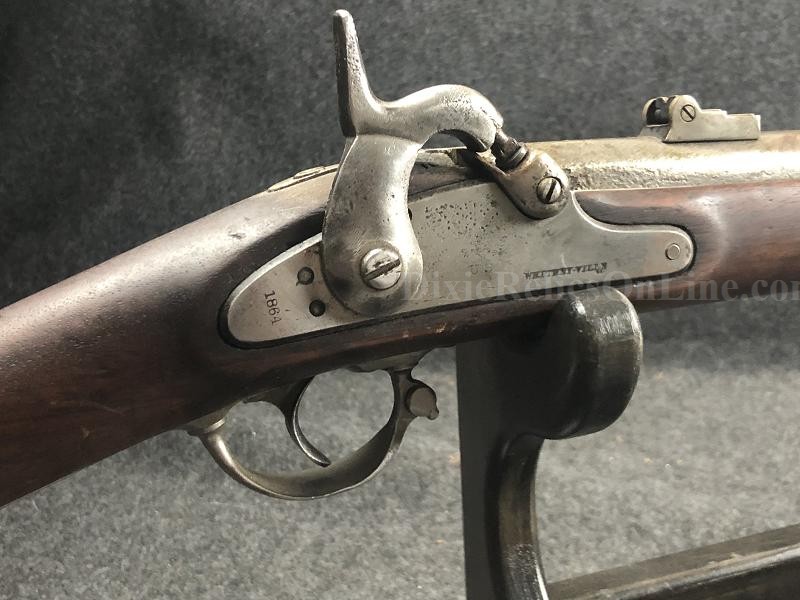 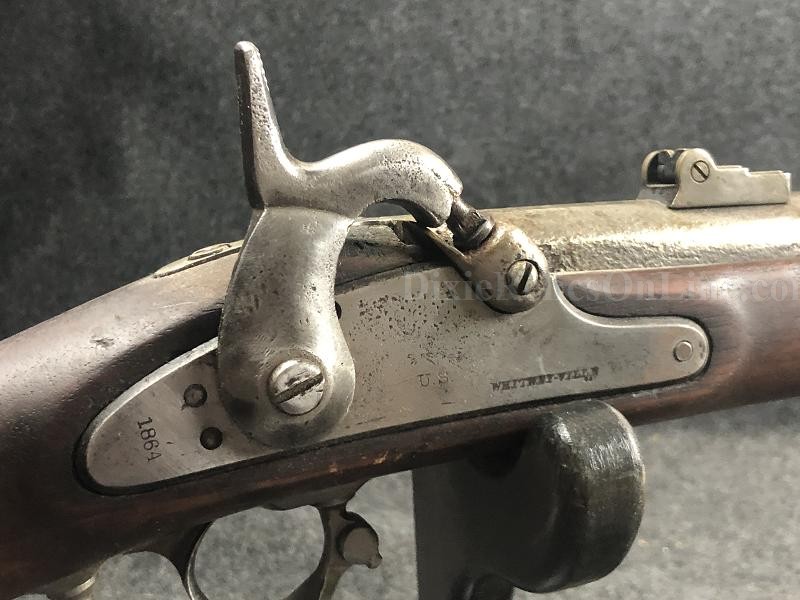 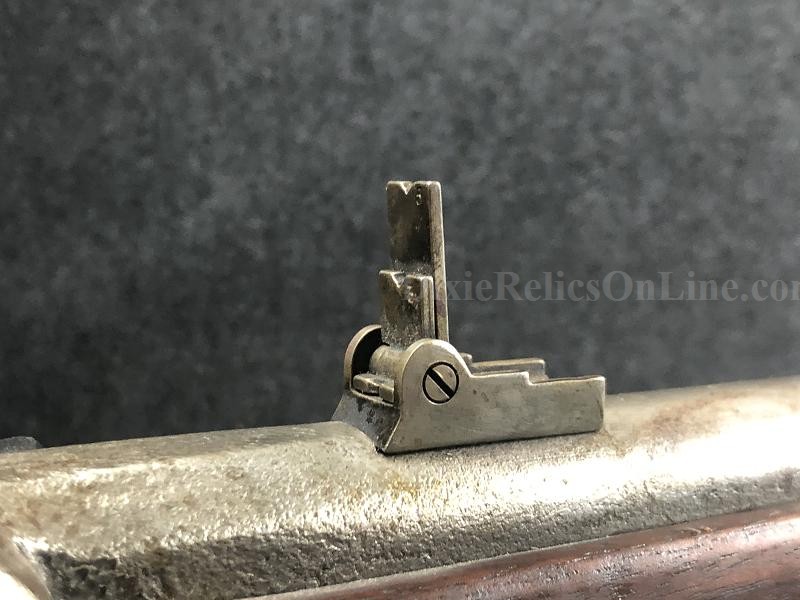 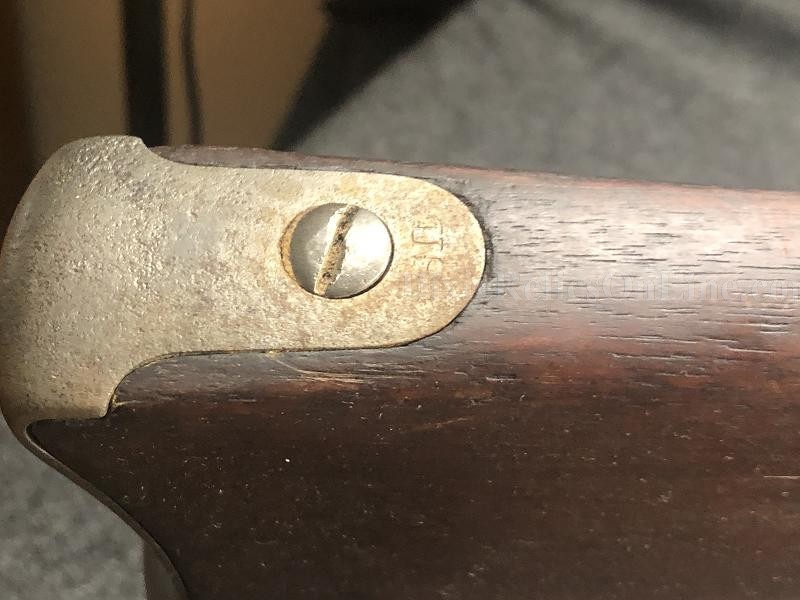 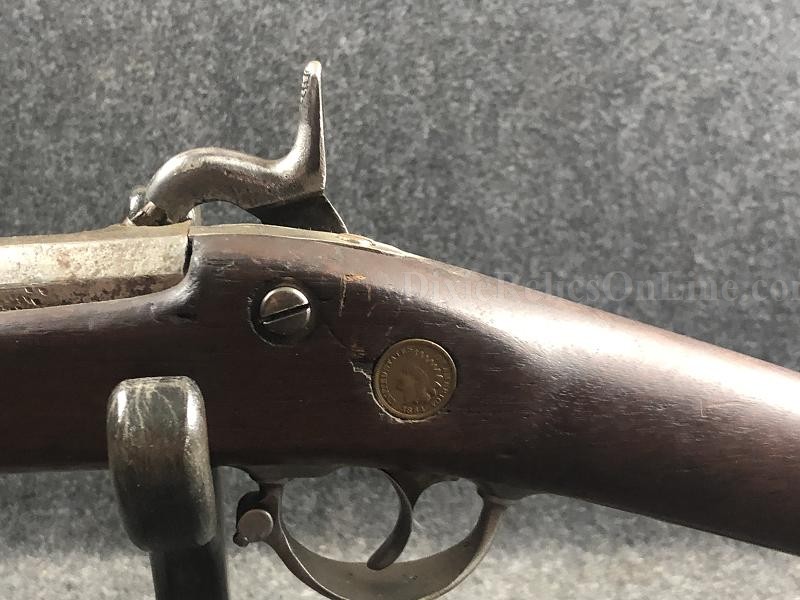 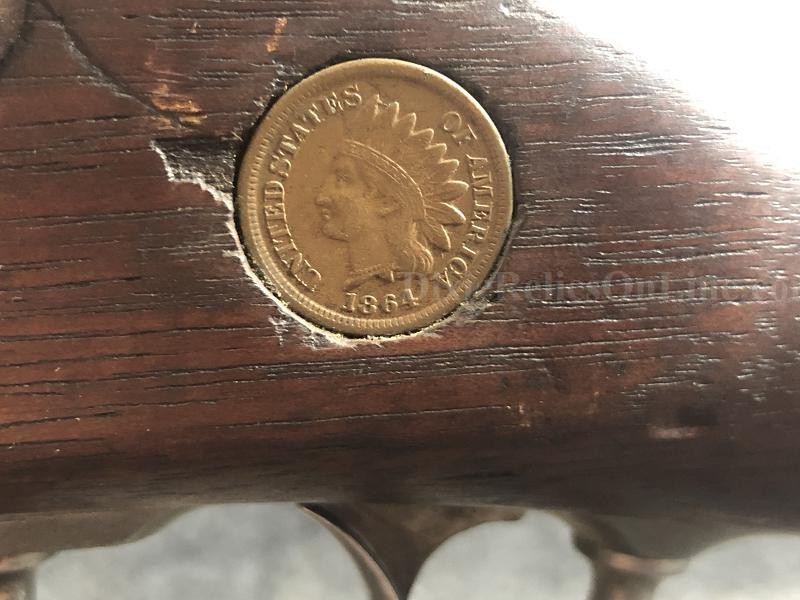 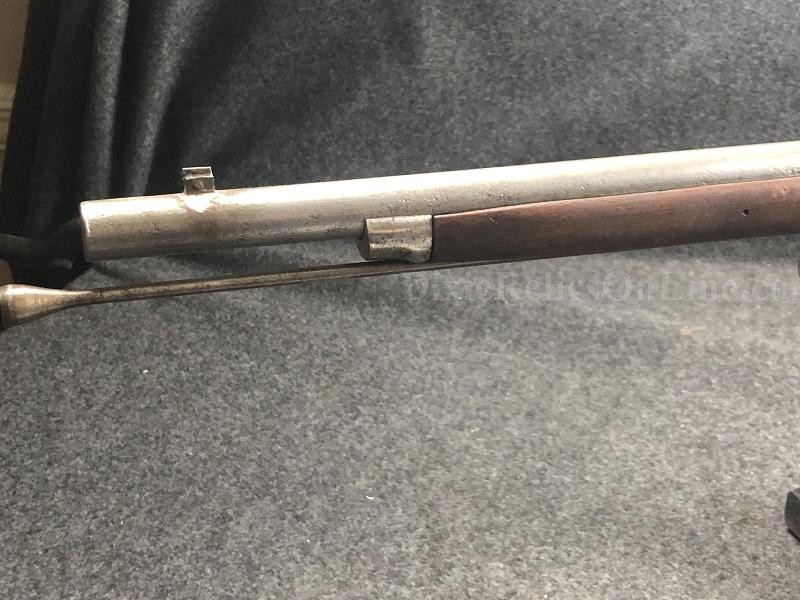 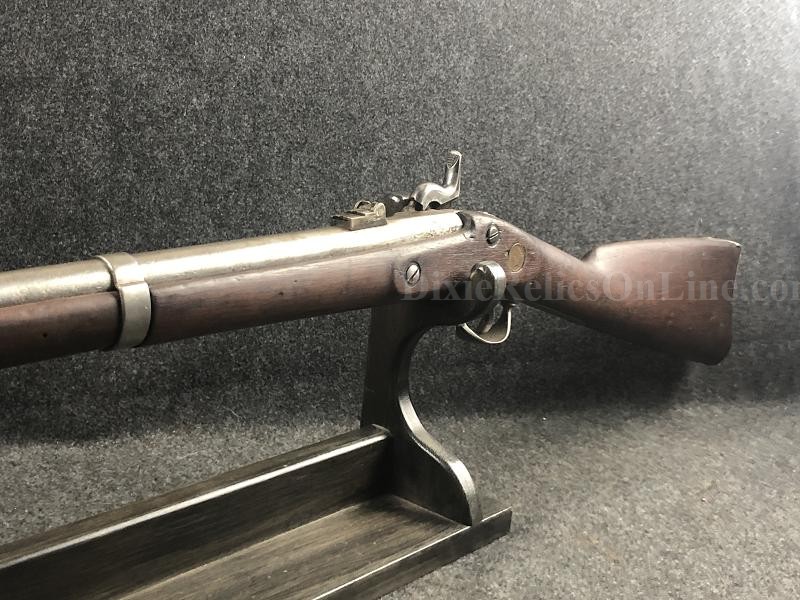 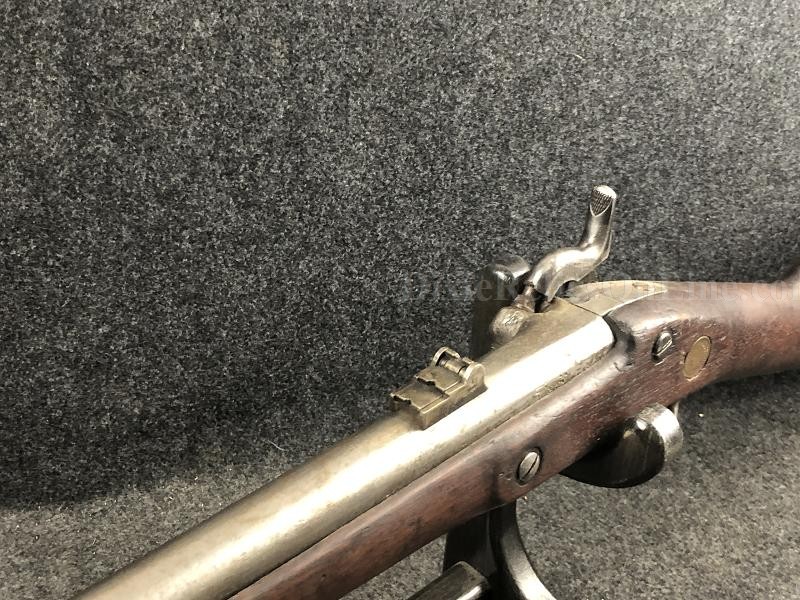 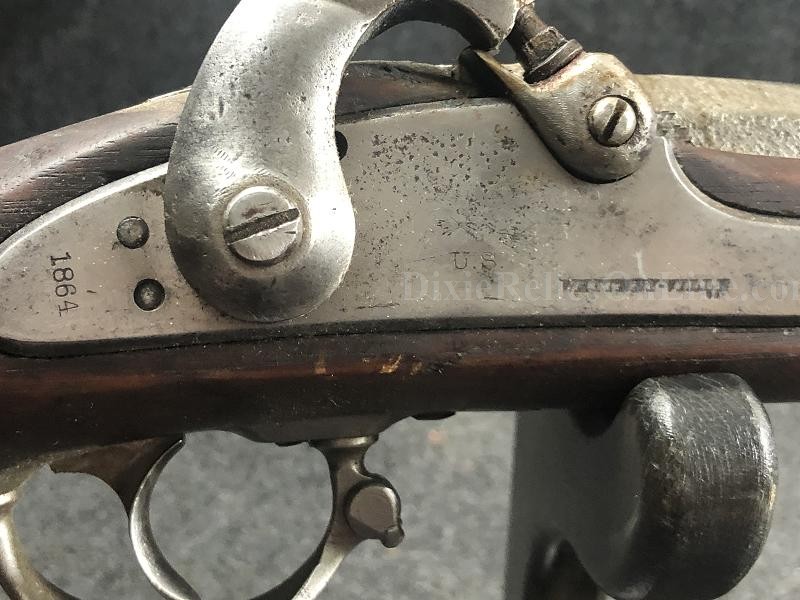 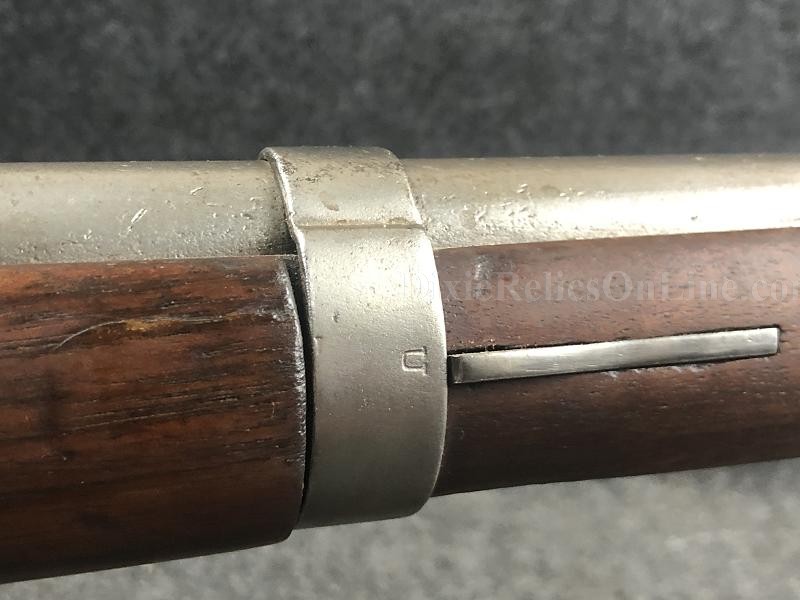 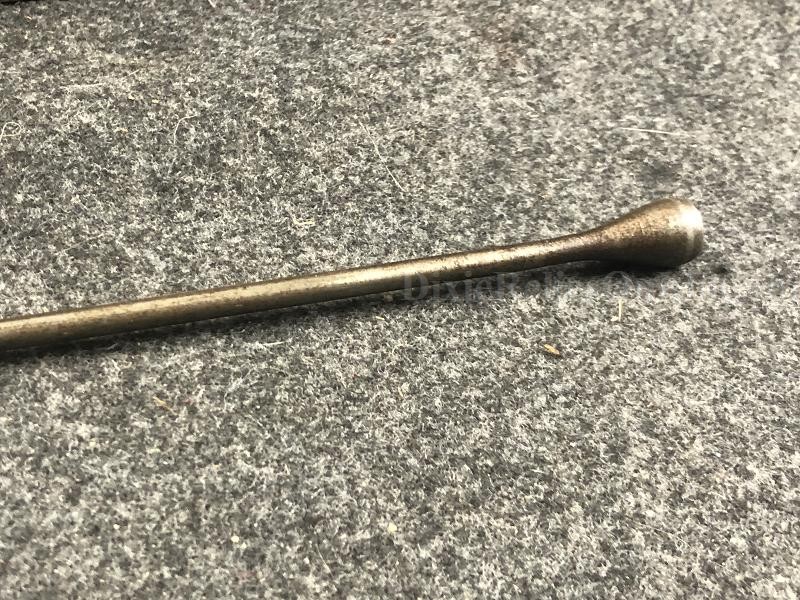 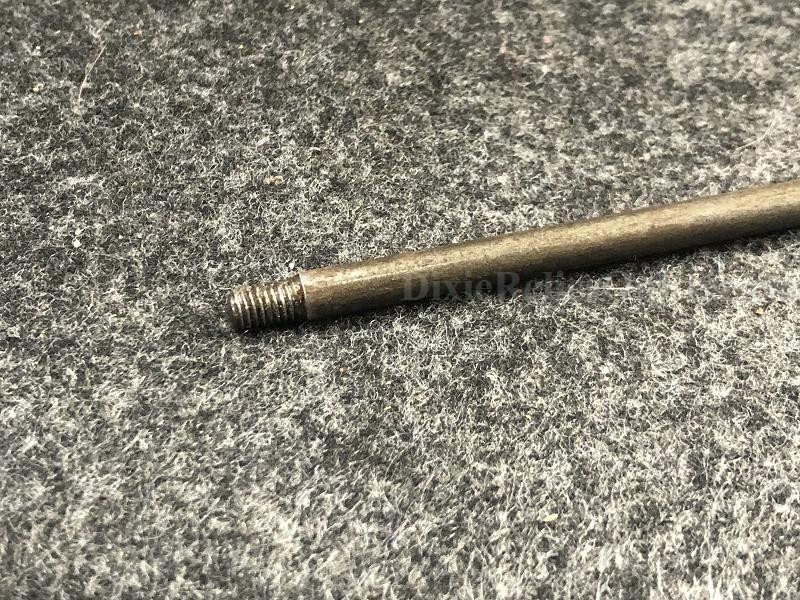 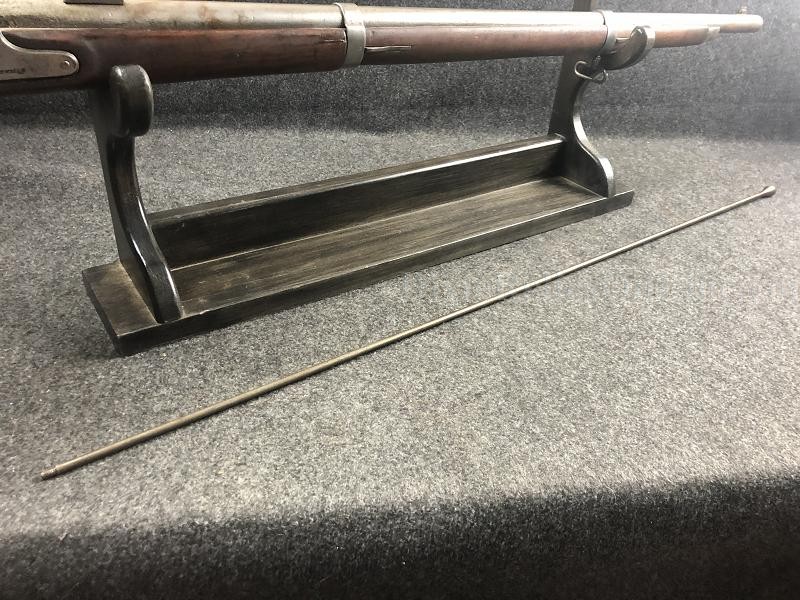 Click on an image to enlarge
Musket retains its original lockplate with eagle motif over ‘U.S’ to the right of the hammer and the dated "1864” behind the hammer. Under the bolster is "WHITNEYVILLE” strong sharp stamp mark. Musket has its original stock, iron nipple, bolster screw, and "C” shaped hammer. Butt plate is "US' marked. What is really cool is the soldier put a 1864 Indian head penny into the stock. Two band shorter rifle and with a 1864 dated barrel and a nice crisp action.

The musket was a product of Eli Whitney’s firm he called the "Whitneyville-Armory production facility in Connecticut circa 1850-70. From a modest factory complex straddling the Mill River just North of New Haven, Connecticut, the Whitney Armory produced more long-arms prior to and during the Civil War than any other private domestic manufacturer. From available records, it appears that the Whitney Armory turned out approximately 141,620 shoulder arms between 1826 and 1865. Furthermore, the variety of arms made was unsurpassed, even when compared to the National Armories. Most if not all of the Whitney longarms of this period found their way into the hands of Union and Confederate soldiers.

From the first government contract in 1798 through the Civil War, Whitney Armory had a steady flow of government work. Between 1826 and 1839, they made 39,000 M1816/22 flintlock muskets, most of which were subsequently converted to percussion. In addition, at least 2,000 more were made directly under state contracts. When the 1841 US Rifle was adopted, Whitney, then under the leadership of Eli Whitney, Jr., received orders totaling 26,500, between 1843 and 1855. They made another 600 with M1855 long-range sights and 420 more for Ohio using parts left over from the US contracts.

Ever creative and practical, Whitney was a master at taking parts discarded by others and incorporating them into serviceable weapons. With the advent of the Civil War, and during the months leading up to the conflict, several unusual models of long arms were made using parts from other sources, such as the US Armory at Springfield and the defunct Robbins and Lawrence operation in Windsor, Vermont. One model closely resembled the US M1855 Rifle-musket, using M1855 lock-plates from Springfield. Only 350 were made and all appear to have been sold to the State of Connecticut around 1861. Around this time, Whitney also made a completely different model which strongly resembled the P53 British Enfield Rifle-musket. This unique arm was made largely from surplus P53 Enfield parts left over from Robbins and Lawrence’s failed Crimean War contract with British government. It is estimated that 3,500 were made and sold to State governments, with 2,000 going to Maryland, 1,225 going to Georgia and 75 to Mississippi in the months just prior to the war. Other arms made in small quantities during this time included 750 Enfield style two-band rifles and 100 M1855 US style two-band rifles. Despite his New England blue-blood roots, Eli Whitney, Jr. apparently had no qualms about selling arms to Southern states on the eve of the Civil War. Of course, in fairness, the Southern states were still part of the Union at the time, so there was no legal reason to deny them arms.

Whitney’s major federal efforts early in the war were directed at the manufacture of the new Plymouth Rifle. After a slow start, Whitney was able to fill the entire contract of 10,000 stands between 1861 and 1864. With the Plymouth contract nearing completion, Whitney agreed to manufacture 15,000 M1861 US Rifle-muskets for the Federal government. With machinery and gauges in place, this was done quickly and all were delivered in 1863 and 1864. Unlike the Connecticut contract guns, these all met the strict Federal specifications.

CHECK OUT THE ORIGINAL WHITWORTH RIFLE.